Valkyrie and The Preposterous Warriors of The Glamour Village 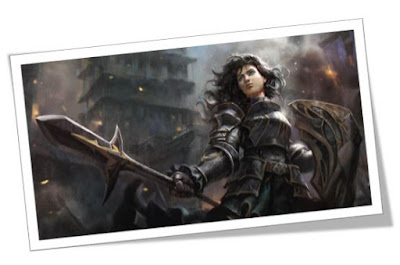 Once upon a time, there was a huge fiesta of Art and Culture in The Village of Glamour that were well run by the warriors: Valkyrie and The Preposterous Warriors of The Glamour Village. Valkyrie and Dragonborn Sorcerer - Fly Fire with their own unique Wau, Darth Vader with their special spinning top and The Elf Wizard with their extraordinary flying kites. The festival was full with cheers and jovially celebratory until the wizard - Dark Kucing with Mask warns the warriors of The Glamour Village  that he will come to destroy the festival with help of his spiky warrior from a Porcupine Jungle when the full moon rise during the season. 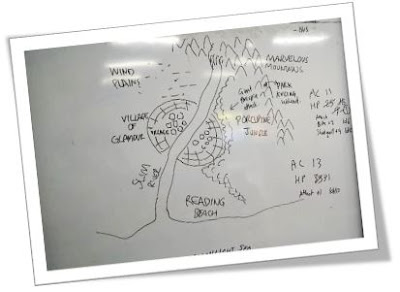 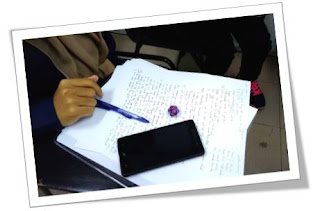 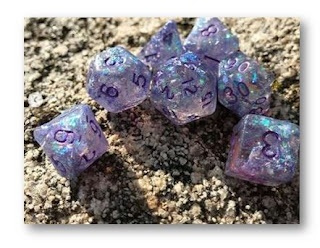 Three days before the full moon rise, parts of the Wau, Kites and Spinning top played during the fiesta were damaged.  The warriors of The Glamour Village feel annoyed and angry when they woke up with a broken and damaged thingy all around them. The shattered of diamond lanterns and the ripped of Kadazandusun embroidery tapestry all over their tent make them feel disappointed.

At the same moment, Valkyrie and Fly Fire found a blood written note "We will destroy all the ridiculous art and culture things if you are stubborn and continue the festival!" on a black big rock nearby the dry land where they used to fly their Wau during the festival. Krecher told their leader on what had happened.

A quarter to eight in the evening, at the sacred stone table, the conversation among Valkyrie, Fly Fire and Krecher stopped when Darth Vader walked through them. They remain silent until Darth Vader point out his thought about the bad wizard. Till the midnight, they altogether try to figure out a solution to overcome the problems.

Valkyrie was all armor-ready before the sunrise. She standby with her sharpens weapons, javelin and pike. She grab a metal shield at the other hand and stood up when the leader, Darth Vader called all of the fighters to gather before they enter the woods with full of incredible untold creatures. Valkyrie, Darth Vader, Fly Fire and Krecher, all of them has prepared themselves with energy and spirits.

Under the light drizzle on that morning, the adventures begin with the first step taken by the leader, Darth Vader bringing all the warriors into the woods. After thirty minutes walking, suddenly, Valkyrie heard a water river flow heavily. Even though she feels unease, she calmly told her team and asked whether they heard the same thing but they did not. Fly Fire got the urge to fly higher and captured a big ditch with a torrents silver shining water flows a few distance away from them.

Valkyrie almost shout when she saw a fallen brittle trunk across ditch. She quickly told her leader. Then, Darth Vader asked all the Warriors to cross the bridge straight away carefully since the silver water increases. Fly Fire and Krechers get across the hot water and sweating heavily. Valkyrie managed to cross the bridge as well and she think that Darth Vader will be at her back but nah. With the full vapour of the hot silver water blurring their vision, they were still waiting for their leader.

After a few minutes, Darth Vader shouted from the middle of the trunk. Valkyrie quickly ran through the trunk and pull him out from the ditch area when she heard the screams.
They altogether safe and continues their journey. 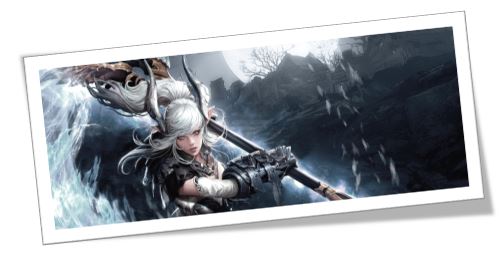 The sun was directly overhead when they treasuring the jungle. They decided to take a break for a while. They rest under a huge shady tree at the middle of the jungle. Everything was fine until Valkyrie was shocked by a soft 'beep beep' sounds near with her. Her big eyes saw an ugly spiky creatures behind sleeping Fly Fire, a few steps far from her. Out of the blue, someone screamed loudly beside her. Yes, it was Krecher!

The situation turns wild when the porcupine roars! Krecher immediately hides behind the bushes. Valkyrie get up and cover herself behind a big rock. Darth Vader as well!

After that, the giant porcupine rise and aggressively want to attack Fly Fire. Without hesitation, Fly Fire cough harsh and loudly fire a violet flame that causes the trees around explode. The smoke blurred the vision of the creatures. The porcupine groaned in pain. Then, Fly Fire quickly turns around and throw the hidden magical darts towards the porcupine mutants. However, the creatures  was still mad and turns insane under the soreness that he felt. The porcupine groaned and jump towards Fly Fire. The mutant bites Fly Fire and push them away on the ground hitting the tree.

Valkyrie stood and grab neatly her javelin when she heard Fly Fire moan in pain. When the creature and Fly Fire were struggling with each other, Valkyrie slowly crawl on the big rock that she was hiding just now. With vitality and spirit, Valkyrie take the opportunity to jump from the big rock, holding her secret javelin and stabbed at the back of the porcupine! The creatures groaned painfully and slowly kneel down on the ground. 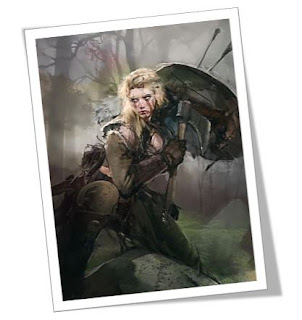 Fly Fire cough harshly and produce more bigger violet flame than before. The bushes burnt. The stabbed porcupine was on fire too! However, the grumble spiky creatures manage to get up and breathe weirdly. The warriors stand out to prepare themselves. Valkyrie was holding tightly her shield, standing near to her was Fly Fire. Out of five seconds, the porcupine quill flew out from the mutant body and hit the Fly Fire shoulder! Valkyrie able to cover herself with the shield. She ran towards the bleeding Fly Fire on the ground.

The creatures came nearer them but then Darth Vader took chance to attack the creatures but he was pushed away easily. When the Fly Fire saw his leader was down, Fly Fire try to stand with all the energy he had, he cough the final harsh blue flame fire.

Eventually the mutants were damaged and killed. They were all rescued.

Their step stopped, when Valkyrie rise her right hand and she turns her body to her team. She was making a finger on lips silence gesture. Crack! An old man with rope around his shoulder freeze when he stepped on a branch.

Four pairs of eyes were looking at him like they want to eat him! Valkyrie can see him shaking and freeze there with a bubble of 'gulp' on his head.

Valkyrie move her step forward to the old man, followed by the other warriors. The old man quickly told them that he  want to hurry. He just want to find some firewood. Valkyrie calmly explained to him about the intention to find the wizard. Then, he turn up to warn them about the untold story of the wizard who has a weird face which live on the Marvelous Mountain.

Darth Vader asked him to show the route but the old man did not want to. He only told them to follow the narrow trails until they found the mountain.

Then, the old man quickly said he want to leave and less than five seconds, he disappeared from the sight.


It was drizzling when they reach near to the mountain. The land was slippery.

Darth Vader leads them to climb with no difficulty at all. Valkyrie climb carefully, since her armor was too heavy and make her to climb the mountain slowly. It was very challenging obstacle for her. But with all the spirits that she has, her soul and inner self of a human fighters, eventually, she manage to be on the mountain safely after an hour of climbing.

Even though Fly Fire was still in pain, he able to fly slowly and reached at the top of the mountain. Krecher as well. 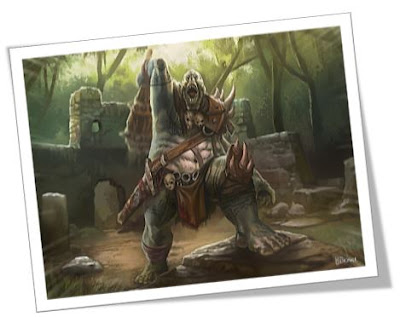 Chapter 6
Greet By An Ogre and The Wizard

As the sun was going down, Darth Vader lead his team as a searcher since he knows the land and after walking for a few minutes, they finally found a creepy huge cave.

With the unique bright eyes, Krecher able to see clearly in the dark. So, she leads them into the cave carefully. Valkyrie was holding tight her shield and fully prepared herself with upcoming obstacle.
They walk slowly into the cave, until Krecher gave a sign to stop. There was a huge solid door in front of them. Hiding behind the door, a fat tall guy with a great smelly feet was standing and holding a bludgeon.

With no hesitation, Darth Vader went straight forward to open the door. But suddenly an explosion occurs. The colorful acid explosion has damaged Darth Vader. He moans in pain.

While all the chaos, Valkyrie standby herself with her magical light-pike. Fly Fire and Krecher helps to put aside his leader, Darth Vader. Unfortunately, the giant with big fat belly came out and smashed the door with his smelly oversize feet. Fly Fire was harmed by the shattered door. They were all attacked by that insane ogre.

Valkyrie jump and fight by using the light-pike she had. She threw it all directly to the ogre. The ogre groaned painfully. With helps from the fireball by Krecher, both of them struggling to attack and assault against the ogre non stop. The ogre hefted high his massy bludgeon and swing it around him to protect himself.

At the same time, Darth Vader and Fly Fire were on the ground. They have used all of their powers in fighting the enemy. Suddenly, Fly Fire saw that the shattered door was connecting to another old dark high building hidden behind it. He dragged Darth Vader slowly went through the way out from the chaos, and then he saw a black suit man standing still on the balcony of the building.

Valkyrie saw them went out to the building. She kept attacks the bad giant.

Finally, she jumped towards the ogre. She use the last powerful light-pike and hit directly to the smelly feet of the ogre. The ogre groaned and moaned loudly. He cried painfully and suddenly his voice changed from a harsh groaned to a screaming little child. Valkyrie freeze. Krecher stopped firing the fireballs when she saw a big fat ogre turns to a 40 inches size creature. He cried and ran away. What a hilarious ogre! Both of the warriors laughed and settle down on the ground.

Fly Fire step forward and talk to the wizard bravely that they do not want their culture to be gone. The wizard with his red eyes was looking at Fly Fire and shouted that their culture is torturing him! All the culture is mocking on him. 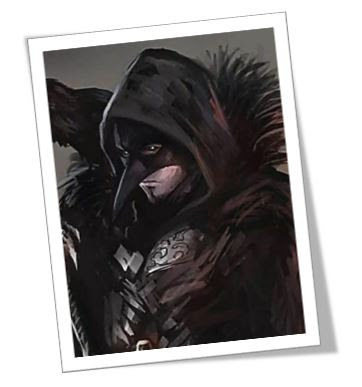 After all, Valkyrie and Krecher were standing beside Fly Fire. Valkyrie told the wizard and stand out with her opinions that the culture is important to preserve the originality and traditional cultures. Krecher supports with the importance of preventing the culture from fading away.

Darth Vader speak up that everyone can involve and play all the arts and culture without hesitation even though the races is different.

The wizard was suddenly quiet for a few minutes. He then asked slowly if he can join the fiesta and get rid all of the anger and turbulent among us.

"But first, open your mask!" shouted Valkyrie out of sudden.

The wizard steadily opened the mask at his face and grinned. He was look-alike as a Cheshire cat from Alice and Wonderlands! But this one is an old dark version and cannot even walk stably.

The battle was over.

They walk down together and the fiesta of Art and Cultures in The Village of Glamours continues. 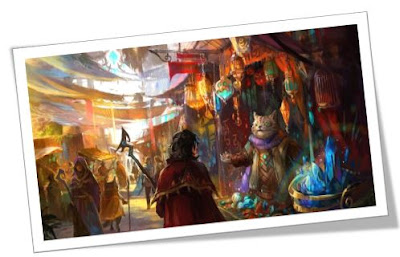 Popular posts from this blog

- May 15, 2019
We discussed about globetrotting and travel during this week. Our group has chosen a beautiful amazing country which is Kashmir, Pakistan. We chose Kashmir because of their breathtaking scenery, unique cuisine and their traditional culture.
Read more